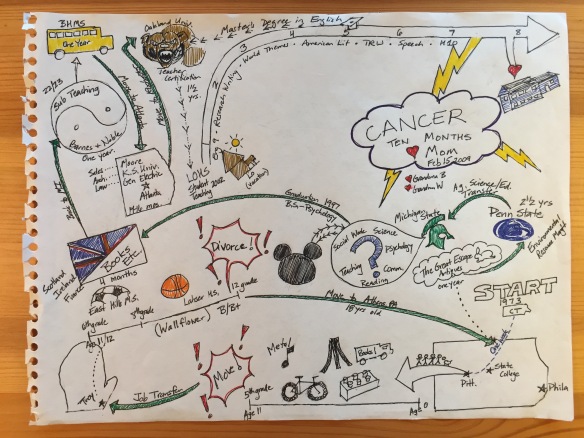 If you find yourself stuck – in an unhealthy relationship, an unsatisfying job, an unstable financial predicament, or an unending creative funk – a life map provides a big-picture view of how you reached your current impasse. Creating a life map can help you understand the journey to your current position, however you define it. The map’s scale should take on whatever dimensions feel right. In other words, your map could chart your path through the last few weeks, the most recent couple of months, or the preceding two decades.

Although we are addicted to the small screens of our phones, a broad view is often necessary for us to gain a more accurate perspective on where we have been and where we are now. If we challenge ourselves to step outside of our minds, grab a box of colored pencils or pens, and create a life map we can (1) stretch our awareness, (2) uncover people, places, and events that have been forgotten or discarded, (3) affirm our involvement in experiences that have been unsettling or confusing, (4) take ownership of those very experiences by placing them on the page, and (5) reveal connections and/or patterns between the landmarks that appear as the map takes shape.

The life map featured above was created in 2011 or 2012. Honestly, I cannot remember the circumstances that motivated me to design it. I was not in crisis, but I was also not at peace with my state of affairs. I do recall, however, the sense of excitement that grew inside me when I envisioned placing my path on paper. An eagerness to see what would emerge from my efforts quickly took hold, and I grabbed a pencil to begin the process. My goal was to cover the page and, in doing so, uncover something that I felt I was missing. The first shape that I drew was the outline of the state of Pennsylvania in the lower-right corner.

Once the outline of Pennsylvania was sketched out, I added three cities of familial importance – Pittsburgh, State College, and Philadelphia – and then had the idea to indicate what sorts of activities and interests I enjoyed during the years I lived in the first of those cities. What resulted was the arrow arcing from Pittsburgh to the timeline stretching from ages 0 to 11. From there, I needed to indicate a monumental change in the trajectory of a kid growing up in a comfortable home at the top of a dead end street. My family moved to Michigan after I finished 5thgrade, so I drew a sort of bursting star around the word Move! and surrounded it with exclamation points. This same star technique was utilized several inches above the original to mark my parents’ divorce at the end of my high school years.

There are two points that I would like to make regarding the manner in which my map was produced: (1) I did not start with a plan, an outline, or a list of bullet points. Rather, I followed my hunch that I needed to begin with my home state. So I took a chance and placed its silhouette in the lower-right corner. (2) I did not “edit” or “rearrange” the landmarks as I was crafting them. Where you see them now is where my instincts, imagination, and sense of creativity motivated me to place them. In other words, I let the map emerge organically on the page in front of me. I let go of my desire to be a perfectionist, and embraced that what I was designing was intended to appear in small steps from the ether. My advice is to follow these two practices – take a blank sheet of paper and begin wherever it feels right to do so, and then let the process take over and surrender to it.

Lastly, I want to comment about something on my map that I find uncomfortable but perhaps necessary. Do you notice the sizeable white space near the top-center of the page? I wish it weren’t there. I wish it were filled with another image or two and/or some text that adds more value to the overall piece. But that is not the way that the map was produced. That “gap” emerged naturally, and I elected to let it remain there. Now it serves as a sort of reminder that projects hatched from the heart are not always (ever?) going to adhere to some of our cognitive desires for “neatness” or “balance” or “completion.” And, as the years have passed, I find that I almost don’t care that the space sits there. Please give yourself this same leeway; let go of the self-critical inner voice and accept – even anticipate, perhaps – that the map that you create may not initially be as pleasing as you had hoped.

What is most important is that whatever landscape of shapes, labels, and arrows you produce, its totality yields insights into your present condition.